We ditched the dock at sunrise on Tuesday morning. Unfortunately, it did not go off without a hitch- our chart plotter didn’t work. We turned it off and back on again and were repeatedly met with a blank screen. 🙄 We momentarily thought the multiple lightning storms we had watched roll through Brunswick while we were there must’ve impacted us… Just when we were about to give up, turn the AC back on, and scrounge up the cash to replace it, it started working. We’re not ones to look a gift horse in the mouth, so off we went! Once we got out far enough, we turned into the wind, raised the main, and brought out the jib. We didn’t have much wind to work with, so we kept an engine on and set our course. We motor sailed through the afternoon and decided to throw our hand lines in to see if we could catch some dinner. 🐟 Within minutes, we caught what we thought was a skipjack tuna (fish experts: let us know if we’re wrong!). Unfortunately, those don’t make very good meals, so we released it and tried again. Later that afternoon, we pulled in two barracudas, and minutes after, another skipjack! That’s 4 catches and releases! It was an eventful yet fruitless fishing day.

We were also visited by a couple of pods of dolphins, which never gets old. We sat on the bow, waving and cheering them on. At times it looked like they turned their heads up to look at us! Do you think they get bummed when we walk away to trim the sails just like we get bummed when they swim away? 🐬 Anyway, we ate dinner together and then split up for the night. I took the first watch shift, and it was delightfully uneventful. There wasn’t much moonlight, but the bioluminescence was beautiful! It was chunkier than the bioluminescence I’ve seen in the past, but it lit up the wake around us nonetheless.

We hit the Gulf Stream around 11 pm and our speed increased by several knots, but we still didn’t have enough wind to shut off the engine. Luckily, the wind filled out during Ray’s shift, and we got to sail through the rest of the night! Using the jib and the main (reefed), we cruised along at 11-12kn until just after sunrise.

Day 2 was less than desirable… The heat was miserable. We had 1-3kn of wind, so no breeze to cool us down, and we were struggling. It was hot on day 1, don’t get me wrong, but nothing compared to day 2. We tried to keep things in perspective- we were happy to be moving, we’re lucky to live this lifestyle, yadda yadda- but we had to motor the entire day, and I had to strap an ice pack to my neck to be able to cook dinner! 🥵 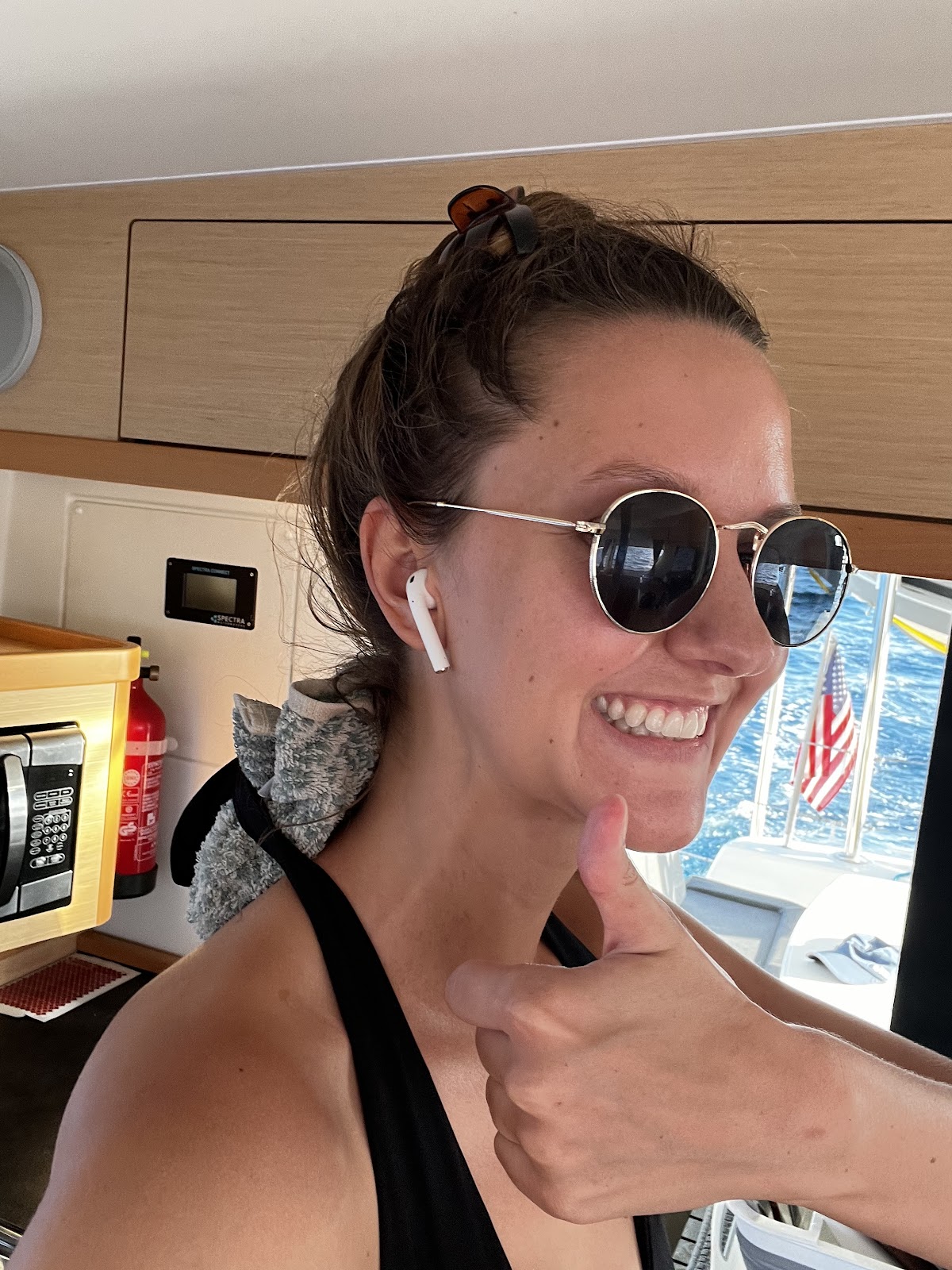 We rigged up a sunshade at the helm using a towel and some clips and counted down to sunset. That night was spent dodging squalls, but we were rewarded with some residual wind. We were able to bring out the gennaker the next day and do some sailing! ⛵️ We rounded Cape Hatteras that afternoon. Hatteras is known amongst mariners as the most dangerous spot on the Atlantic seaboard due to its extensive shoaling. More than 2 thousand ships have sunk in what is now referred to as “the graveyard of the Atlantic”. A lighthouse was erected in 1803 to help mark the shoals, but it was ineffective and replaced by America’s tallest lighthouse in 1870… which also proved ineffective. After lots of back and forth with The Lighthouse Board, the Senate, Congress, and a few more failed attempts, a new structure called the Lightship was built. The Lightship suffered significant damage from Hurricane Fran in 1996, and its light was consequently extinguished in 2001. The structure still stands, but in 2012 it was determined to need $2.3 million in repairs and was subsequently auctioned off. Minnesota entrepreneur Dave Schneider purchased the structure for $20,000 and announced his plan to make over $1 million in repairs using volunteers to help renovate in exchange for the beautiful views and unique diving/fishing opportunities the area provides. Schneider then wanted to use the structure for various research projects, including his company Zap Water. I’m not sure how much of this plan he was able to accomplish, I wasn’t able to find any recent information, but I’ve heard it’s back on the market if anyone is interested… We passed it on Thursday afternoon! We approached Norfolk, Virginia, Friday morning and dropped anchor shortly after that. We tried to get some rest after days of sleeping in shifts, but it was too hot to sleep. Ray got fed up with the temperature and decided to cut his hair for some relief. RIP long-haired Ray!

We headed to shore after to find some AC and food.

Yesterday we picked up our long-awaited watermaker part from a local FedEx office and wandered around downtown Norfolk, gawking at the massive military ships. 😳 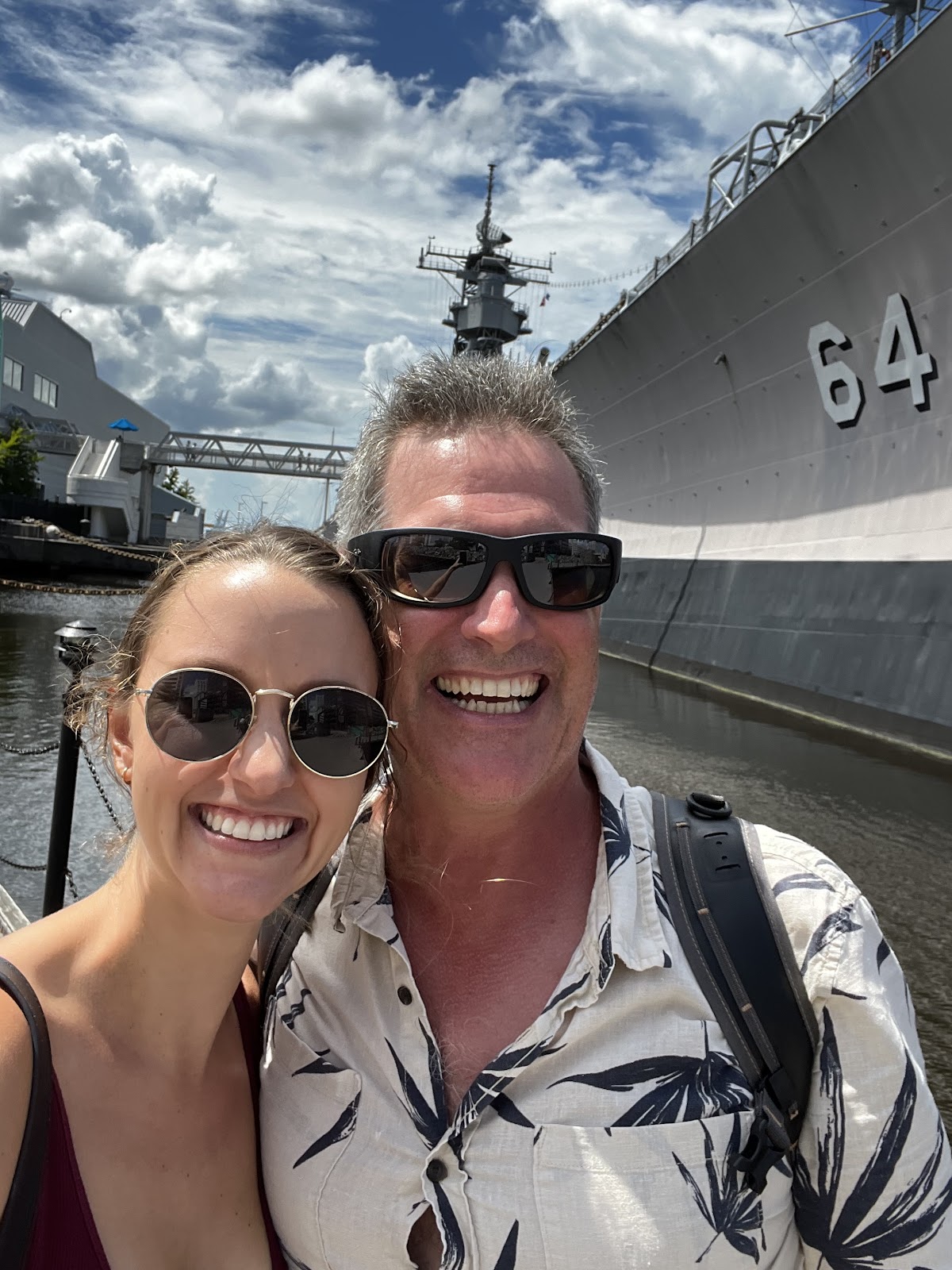 I promise I’m not intentionally leaving you hanging about our watermaker woes; I just want to get it fully resolved before filling you in, so stay tuned!

I’d tell you about our plan for the day today, but we don’t have one. 😂 I’ll probably spend some time editing our next YouTube video… I was hoping to get it up before finishing this email, but I got some stunning footage that deserves a bit more of my attention, so it’ll likely go up tomorrow or Tuesday. If you click the bell icon on our channel, you’ll be notified when it’s live!

I hope you had a great week. ❤️